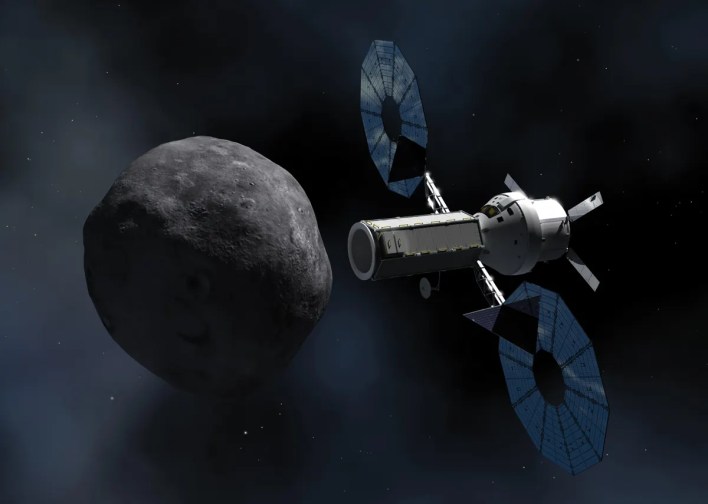 A slew of activities amongst China’s private and state-owned aerospace companies this year are a testament to China’s growing ambitions for economic and military domination of space. On October 19, the Academy of Aerospace Solid Propulsion Technology (AASPT) – which belongs to the China Aerospace Science and Technology Corporation (CASC) – test fired “the most powerful solid rocket motor with the largest thrust in the world so far.” The 500 tons of thrust is designed to propel the next iteration of China’s heavy-lift rockets, which would meet various demands for space missions like crewed Moon landings, deep space exploration, and off-world resource extraction.

Exploration of space-based natural resources are on the Chinese policy makers’ mind. The question is, what Joe Biden thinks?

In April of this year, China’s Shenzen Origin Space Technology Co. Ltd. launched the NEO-1, the first commercial spacecraft dedicated to the mining of space resources – from asteroids to the lunar surface.

Falling costs of space launches and spacecraft technology alongside existing infrastructure provides a unique opportunity to explore extraterrestrial resource extraction. Current technologies are equipped to analyze and categorize asteroids within our solar system with a limited degree of certainty. One of the accompanying payloads to the NEO-1 was the Yuanwang-1, or “little hubble” satellite, which searches the stars for possible asteroid mining targets.

The NEO-1 launch marks another milestone in private satellite development, adding a new player to space based companies which include Japan’s Astroscale. Private asteroid identification via the Sentinel Space Telescope was supported by NASA until 2015. As private investment in space grows, the end goal is to be capable of harvesting resources to bring to Earth.

“Through the development and launch of the spacecraft, Origin Space is able to carry out low-Earth orbit space junk cleanup and prototype technology verification for space resource acquisition, and at the same time demonstrate future asteroid defense related technologies.” In the end, it will come down to progressively lowering the cost of launched unit of weight and booster rocket reliability – before fundamentally new engines may drive the launch costs even further down.

The April launch demonstrates that China is already succeeding while the West is spinning its wheels. The much touted Planetary Resources and Deep Space Industries (DSI) were supposed to be the vanguard of extra-terrestrial resource acquisition with major backers including Google’s Larry Page. But both have since been acquired, the former by block chain company ConsenSys and the latter by Bradford Space, neither of which are prioritizing asteroid mining.

This is too bad, given that that supply chain crunches here on Earth – coupled with the global green energy transition – are spiking demand for strategic minerals that are increasingly hard to come by on our environmentally stressed planet. And here China currently holds a monopoly on rare earth element (REE) extraction and processing to the tune of 90%. REE’s 17 minerals essential for modern computing and manufacturing technologies for everything from solar panels to semi-conductors.

Resource-hungry China also has major involvement in global critical mineral supply chains, which include cobalt, tungsten, and lithium. As I’ve written before, the Chinese hold of upstream and downstream markets is staggering. Possessing 30% of the global mined ore, 80% of the global processing facilities, and an ever increasing list of high dollar investments around the world, China boasts over $36 billion invested in mining projects in Africa alone.

Beijing’s space program clearly indicates that the Chinese would also like to tighten their grip on space-based resources as well. According to research, it is estimated that a small asteroid roughly 200 meters in length that is rich in platinum could be worth up to $300 million. Merrill Lynch predicts the space industry — including extraterrestrial mining industry – to value $2.7 trillion in the next three decades. REEs are fairly common in the solar system, but to what degree remains unknown. The most sought after are M-type asteroids which are mostly metal and hundreds of cubic meters. While these are not the most common, the 27,115 Near Earth asteroids are bound to contain a few. This – and military applications – are no doubt a driving factor of China’s ever increasing space ambitions.

A new goldrush in space based resource extraction has sparked a new age of miners looking to find their fortunes. In reality, the industry cannot get off the ground without further innovation in deep space observation, on-board power, extraction processes, and logistical support in low earth and high earth orbit.

As Uberization of space looms closer, the prices of space launches are falling rapidly. Privately funded satellites like the NEO-1 or Sentinel are the first of many novel economic ventures deploying technologies essential to the viability of solar system mining projects. Private launches by SpaceX and Blue Origin will provide low cost satellite deployment for further testing craft and classification telescopes.

Right now, the cost to capture and process asteroids is far greater than traditional mining techniques. This is changing, but like in traditional mining and rare earths refining, China is far ahead of the U.S. in terms of industrial policy and new investments. China is cognizant of the riches in space, while the U.S. fails to support both their public and private space missions. The United States cannot afford to cede this industry – like it has so many others – to its peer competitors. If we do, the joke is on U.S., and it will not be funny.

With Assistance from James Grant and Sean Moroney

The Future Of Delivery Robots

The Future Of Delivery Robots