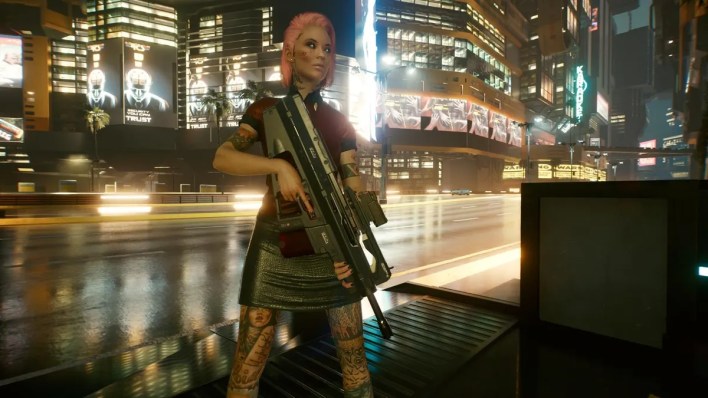 If you want more evidence that CDPR is very, very far away from ceasing work on Cyberpunk 2077, look no further than their career page, where they are currently hiring over 60 different roles tagged as being for Cyberpunk 2077, as pointed out to me by a reddit thread.

The massive list of jobs is loaded mostly with animation roles needed, 22 in total, ranging from cinematic to gameplay to level animators, implying that these positions are not necessarily about “fixing” the game in its current state, but instead adding new content to it, the mysterious pair of paid DLC expansions that are supposed to start rolling out in 2022, and will be the first major additions to the game since launch.

Fans are hoping these expansions will echo what we got from The Witcher 3’s two mega-DLCs, Hearts of Stone and Blood and Wine, which many hold up as the gold standard of DLC in the entire industry, given that they were more or less full-on games by themselves. By this point in The Witcher 3’s lifecycle it had already released Hearts of Stone, and Blood and Wine was about one year after the game debuted, and we’re approaching that in under two months now for Cyberpunk, and things are clearly off schedule. The game also has to finish up putting out the rest of its promise free (small) DLC and its next-gen console versions, which seem like they may not arrive until 2022.

There’s also the persistent rumor that CDPR is planning to make some sort of multiplayer component for Cyberpunk 2077, as data has been found in the files suggesting as much, and a standalone game that was meant to be based around multiplayer was cancelled. But we know even less about this idea than we do the DLCs, the only thing we can guess it that CDPR wants to capture some of that Rockstar GTA Online magic (and revenue) if they can. I’d be open to it, if it was handled correctly, but I just don’t know how “flexible” the current game would be to insert some sort of multiplayer component in there.

With CDPR refusing to talk about any upcoming content, it’s hard to know what’s coming and when it might arrive. My current best guess:

The first time I can see there being a major narrative turnaround regarding Cyberpunk 2077 is if the next-gen versions deliver a fixed version of the game that runs close to PC parity, which can be very gorgeous with the right hardware.

If that doesn’t work, then the next logical point would be the launch of the first expansion, which, if it is on the level of something like Hearts of Stone, could change some people’s minds about the game, in addition to the other fixes that have been made. But nothing feels like a sure thing when it comes to Cyberpunk these days, even if CDPR emphatically says they want to chase after long-term sales for it.

Pick up my sci-fi novels the Herokiller series and its audiobook, and The Earthborn Trilogy, also on audiobook.

The 8 Biggest Business Trends In 2022

Colorado Bear Busts In And Finally Sort Of Busts Out Of A Car, Providing Bearish Lessons For AI Self-Driving Cars

The 8 Biggest Business Trends In 2022

Colorado Bear Busts In And Finally Sort Of Busts Out Of A Car, Providing Bearish Lessons For AI Self-Driving Cars