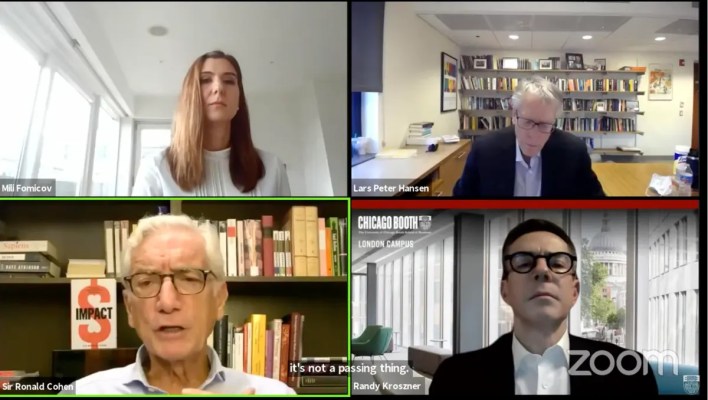 Transparency alone can motivate companies to confront their impact on the climate, and it can also motivate other incentives like a carbon tax, according to a panel of economists and business leaders convened Wednesday by the University of Chicago Booth School of Business.

“No firm wants to be the dirtiest on the block,” said Mili Fomicov, a researcher at the Imperial College Business School’s Centre for Climate Finance & Investment, “and when you have very consistent data across sectors and then create proper benchmarking, the role of competition can be extremely powerful.”

Transparency could do some of the work of a carbon tax, said Sir Ronald Cohen, an investor and philanthropist knighted for pioneering venture capital in the United Kingdom. The carbon tax is widely embraced by economists as a way to motivate businesses to account for their externalities—the damage they inflict on society but do not pay for—but carbon taxes have been politically unpopular in many countries so far.

“One incentive can be taxation, but I actually think transparency provides a massive incentive, if indeed there is a correlation between impact performance and company valuation,” Cohen said. “The transparency itself would create a race to the top.”

Cohen and Fomicov agreed that a “dispersion” has already appeared in markets between companies that are poised to benefit from a cleaner economy and those that are not. It is most evident in the energy sector, Fomicov said, but is appearing across markets, Cohen said.

“Within many sectors you now see a correlation between higher pollution and lower stock market values,” he said. “So the weight of ESG money is affecting the valuation of companies. And so regulators are, not surprisingly, focusing on impact transparency.”

Transparency might also make a carbon tax more politically viable, added Lars Peter Hansen, winner of the 2013 Nobel Prize for Economics, because it will expose the polluters who cost the rest of society.

“I certainly agree that transparency can open the door to better tax systems, for sure,” Hansen said, “and we’re still struggling with how to make carbon taxes implemented in ways that could be politically feasible, and it’s quite possible that transparency can help us achieve that aim. On that I would be all in.”

Cohen worked with the Harvard Business School to assess the climate impact of companies and found that many produce more environmental damage than profit.

“In recent years, most major international airlines have reported healthy profitability. But our calculations show this to be a mirage,” according to a 2020 article in the Harvard Business Review. “In the case of Lufthansa and American Airlines, for example, accounting for their environmental costs of $2.3 and $4.8 billion respectively would make both companies unprofitable.”

“Together they deliver $4 trillion worth of environmental damage in a single year,” Cohen said.

To achieve transparency, the markets need consistent data across sectors, Cohen said, which is where governments may have to step in.

“The crucial step that we need to take now is for governments to mandate impact transparency,” he said. “We need consistency of data, and only governments can mandate that.”

“It’s going to parallel what the Roosevelt Administration did in 1933 and ’34 when investors realized they had no transparency on profit because there were no accepted accounting principles, no auditors. Companies could put a share of their profits into hidden reserves without telling shareholders, and today we are at a similar crossroads.”

Brian Kelly, Mack Brown And The Perspective That Breeds Longevity

The Power Of One: Why It’s More Important Than Ever To Push The DEI Agenda In Your Organization

What Has Driven ArcelorMittal Stock Down?