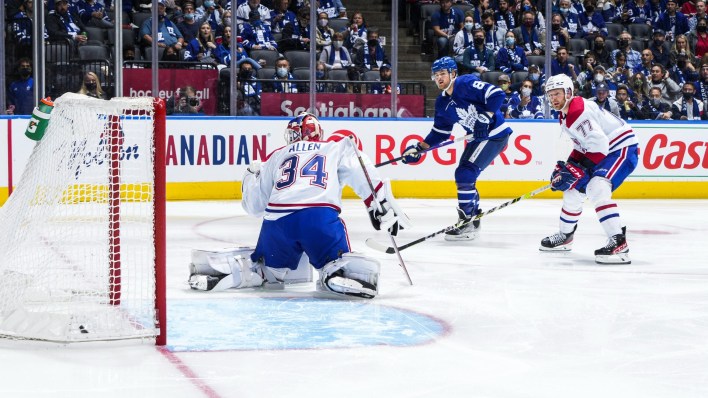 On May 31, the two Original Six squads faced off in a winner-take-all Game 7 that saw Montreal complete the comeback of a 3-1 series deficit with a 3-1 win. A season of “All or Nothing” was nothing for the Leafs, whose Stanley Cup drought of 54 years marched on with the defeat.

But now the calendar has flipped to October. Both teams have seen changes since then, and both teams will be without key guys. Canadiens captain Shea Weber will not play this season, and his career may be over. Carey Price is out for the next month after entering the NHL/NHLPA player assistance program. Joe Thornton left the Leafs for sunny Florida, and Zach Hyman headed west to snowy Edmonton.

Auston Matthews, the 2021 Rocket Richard Trophy winner, is out for this one — and the next two after that — as he continues to recover from offseason wrist surgery.

Mitchell Marner was a game-time decision, but did skate in warmups. He’ll play on a line with captain John Tavares (playing his first non-preseason game since leaving Game 1 vs. the Canadiens after getting kneed in the face) and newcomer Nick Ritchie. Jack Campbell, who was in tears back in May in the locker room and when speaking to the media, will get the start.

The Canadiens will feature their young stars, including Calder Trophy candidate Cole Caufield and centerman Nick Suzuki, who just got a snazzy eight-year, $63 million extension. The energetic duo will be joined by Tyler Toffoli on the wing. Jonathan Drouin will slot back in after taking time off late last season (missed the postseason, too) to deal with anxiety and insomnia. With Price out, Jake Allen will get the nod between the pipes.

Sporting News provided live updates and highlights as the Canadiens and Maple Leafs faced off (all times Eastern) :

9:50 p.m. — Just under a minute left and there’s a faceoff deep in the Leafs zone. Toronto gets it out.

9:46 p.m. — Gallagher doing Gallagher things in this one and there are some pleasantries swapped.

9:35 p.m. — Big stop by Jack Campbell off a redirected shot and then makes the rebound stop.

9:23 p.m. — Toronto kills them both off thanks to some big blocks by guys like Holl and Muzzin. Montreal only got one shot through.

9:19 p.m. — Jason Spezza trips up Brendan Gallagher at the Leafs’ blue line. Canadiens head to the power play for the second time in the game.

9:12 p.m. — GOAL. William Nylander comes off the bench, takes the puck into the zone and scores from the right circle. Maple Leafs lead 2-1.

8:46 p.m. — Canadian Olympic legend Penny Oleksiak is at the game.

Penny Oleksiak is at Scotiabank Arena with all of her Olympic medals, and I’d like to believe she carries them around with her at all times.

8:39 p.m. — Slick stickhandling through the slot by Marner but can’t collect.

8:32 p.m. — Canadiens get one shot on goal. About eight minutes in and it’s their only shot on net in the period.

8:24 p.m. — Jake Allen makes a stop with two Leafs crashing and there’s a mini-scrum with Bunting in the middle of it. There was a quick review but no goal.

7:56 p.m. — Last seconds of the period and Rasmus Dahlin’s point shot goes off Jake Evans and the crossbar.

7:51 p.m. — Maple Leafs starting to get more action in the Canadiens zone.

7:38 p.m. — PP GOAL. One second before the power play ends, the Canadiens collapse and, after he gets two Canadiens to screen — plus two of his own guys in front — Pierre Engvall beats Jake Allen. Game tied 1-1.

7:35 p.m. — Alexander Romanov gets called for interference and Leafs get a chance to tie it up.

7:25 p.m. — Scramble in front and again Campbell comes up big. Josh Anderson again in the middle.

7:23 p.m. — Marner down the left wing just misses from the left circle

7:20 p.m. — Less than 30 seconds in and the Canadiens get two quick chances where Jack Campbell has to come up big.

7:20 p.m. — After pregame festivities, including the fans singing the national anthem, game on.

What channel is Canadiens vs. Maple Leafs on?

Coverage begins at 6:30 p.m. ET with a pregame show hosted by Caroline Cameron alongside analysts Kevin Bieksa, Cassie Campbell-Pascall and Elliotte Friedman. Chris Cuthbert will have the call with Craig Simpson serving as the analyst and Kyle Bukauskas as the reporter.

Who was the winner of the last King Of The Ring tournament?

Who was the winner of the last King Of The Ring tournament?