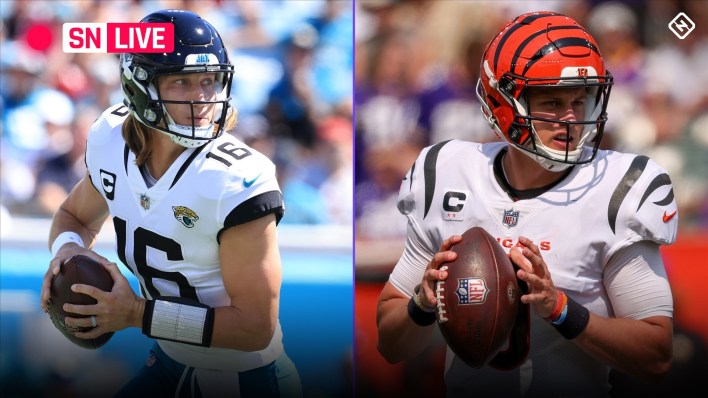 The leaders of the AFC North take on the losers of the AFC South on “Thursday Night Football” this week with the Bengals (2-1) as 7.5-point favorites over the Jaguars (0-3).

Bengals quarterback Joe Burrow will compete against his former coach at Ohio State, Urban Meyer, who now leads the Jaguars. This will also be the first matchup in the NFL between the 2020 first round pick (Burrow) and the 2021 first round pick (Trevor Lawrence).

MORE: Trevor Lawrence vs. Joe Burrow behind the numbers

The Jaguars defense will be challenged stopping Bengals running back Joe Mixon. He ranks second in the NFL in rushing yards (286) and sixth in scrimmage yards (315). In their Week 3 matchup against the Steelers, Mixon piled up 90 yards on 18 carries. The Jaguars have allowed five touchdowns to their opposing running backs this season, the second most in the league.

In his first three games in the NFL, Lawrence has only thrown five touchdowns with seven interceptions. It’s been a struggle for the rookie quarterback so far this year with turnovers.

Sporting News is tracking live updates and highlights from the Bengals vs. Jaguars game on “Thursday Night Football.” Follow along below for the key moments from the Week 3 matchup.

Live updates will begin around kickoff at 8:20 p.m. ET.

How to watch Bengals vs. Jaguars

Bengals vs. Jaguars is scheduled to kick off at 8:20 p.m. ET on Thursday night. The game will be broadcast exclusively on NFL Network with Fox Sports announcers Joe Buck and Troy Aikman on the call and Erin Andrews and Kristina Pink on the sidelines.

IPL 2021: "Getting Roy was a big wicket" - Josh Hazlewood reacts after match-winning spell against SRH