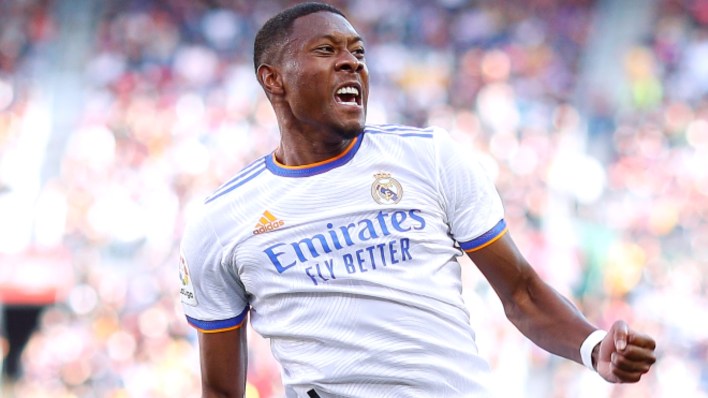 There’s no Lionel Messi, but there’s a lot on the line when Barcelona and Real Madrid meet in the first El Clasico of the season at the Camp Nou. This will be the first of two league meetings, though they could also see each other in other competitions.

Barcelona (8th, 15 points) can overtake Real Madrid (4th, 17 points) in the standings with a victory, but a win would be important for more than just the three points: A strong performance could win over its home crowd again, showing Blaugrana fans the players have what it takes to be contenders in La Liga after some unconvincing displays so far in the start of the post-Messi era.

The pressure will be on 18-year-old Ansu Fati, who inherited the Barcelona No. 10 shirt from Lionel Messi, and he will need to outshine a Real Madrid attack that features Ballon d’Or candidate Karim Benzema and red-hot Vincius Junior, who at 21 years old will also be keen on leaving his mark on the match.

MORE: Who are the FIFA Ballon d’Or finalists?

Sporting News will follow the match live and provide score updates, commentary and highlights as they are available.

97th min.: Kun Aguero scores! Sergino Dest with the cross and Aguero puts it away with a clinical finish, but it’s too late.

90th min.: Thibaut Courtois goes down. Something’s up with his right knee (his plant leg) after a clearance. The trainers are on the field to tend to him.

87th min.: SUB – Vinicius Junior is done. He ran himself into the ground and it showed in the second half. Marco Asensio on for him.

85th min.: SUB – Another forward comes on for Barcelona. Luuk de Jong in for Gavi. We’ll see if they can create chances for them.

84th min.: It’s been a bit since Barcelona has threatened. It’s a header from Sergio Aguero, but he can’t get high enough to head it down and it goes high.

74th min.: Just moments after Sergino Dest nearly scores, Kun Aguero comes on for Ansu Fati. We’ll see what the veteran can do.

62nd min.: There’s Benzema with a chance. His shot is central and it’s stopped by Ter Stegen. Both sides creating chances. Next goal is going to be huge.

60th min.: Sergino Dest gives the ball away to Vinicius, but then recovers to get the ball back before Vinicius can inflict any damage.

58th min.: Hand ball in the Real Madrid box! The ball strikes the arm of Toni Kroos on a challenge against Frenkie de Jong, and Barcelona want the penalty. The referee doesn’t give it and Gerard Pique is booked for protests.

49th min.: In four minutes he’s been on the field, Coutinho has been involved, helping to win a corner and generally creating danger. Meanwhile, Fati gets another shot off in the box, but goalkeeper Thibaut Courtois is right there to grab it at the near post.

47th min.: SUB – Ronald Koeman is going for it. Philippe Coutinho is in at halftime for Oscar Mingueza and Sergino Dest takes over at right back.

46th min.: Second half is underway and Ansu Fati already with a cross from the left that goes through the Real Madrid box.

Halftime: It’s been a good, competitive first half. Barcelona started strong and Ansu Fati looked up for it, but then Vinicius Junior began to take over with his runs down the left and then with the pass that launched the goal move. Barcelona missed a great chance through U.S. international Sergino Dest just moments before that goal. That’s how close this game has been, but Vinicius is clearly the best player on the field so far and that’s been the difference.

44th min.: Ansu Fati takes a shot in the box and it’s Alaba with the block. Barcelona close to the equalizer just before the break.

32nd min.: Goal Real Madrid! In a quick transition, Vinicius finds Rodrygo with a cross-field pass and he feeds Alaba who was making the breakout run from his center back position. He let loose a left-footed shot that beats Ter Stegen. Great move by Real Madrid.

25th min.: What a chance for Sergino Dest! All alone in the box and he skies it. A cross by Depay is dummied by Fati, who left it for him. Wow.

24th min.: Vinicius again in the box and he’s dancing around while Ter Stegen chases him. His shot is blocked. Meanwhile, this is what happened after that last episiode in the box:

21st min.: Vinicius goes down in the box on a challenge from the right back Oscar Mingueza. It looked like a penalty because Mingueza bumps him, but the referee looks the other way.

14th min.: A Vinicius run down the left side of the Barcelona box is stopped before he can get a cross off. Eric Garcia stuffed him. Two straight corners for Real Madrid don’t generate any danger.

7th min.: Strong start by Barcelona. It’s actually Ansu Fati operating down the middle of the attack. Memphis Depay is wide left, where he likes to operate.

3rd min.: Fati down in the Real Madrid box! After a Casemiro giveaway, Ansu Fati is put through in the box, but he’s nudged off the ball. No penalty call from the ref.

Casemiro came to play today, for Barcelona. The guy is out here giving the entire Madrid fanbase heart attacks.

9:28 a.m.: A reminder just how different this El Clasico will feel. It’s been a long time without Messi or Sergio Ramos.

Today does really mark the beginning of a brand new era for #ElClásico .

The last time this game didn’t feature neither Messi nor Ramos (most recent captains) was 16 years ago, in 2005.

9:06 a.m.: Gavi is the youngest player to start El Clasico … this century.

Ronald Koeman will miss two starters in center back Ronald Araujo (hamstring) and central midfielder Pedri (quad), while forward Martin Braithwaite (left knee) is out with a long-term injury. Jordi Alaba recovered from a foot sprain and got the start. Ousmane Dembele’s long-awaited return is scheduled to happen in midweek against Rayo Vallecano.

Real Madrid is also missing a few players: Gareth Bale and Dani Ceballos are the long-term injury absences, while Luka Jovic and Isco have been training on the side. Lucas Vasquez retains the right back spot, but the regular at the position, Dani Carvajal, is now available off the bench. Eden Hazard, who has returned to normal training, is on the bench.

How to watch Barcelona vs. Real Madrid

The match will only be available in the USA via the ESPN+ streaming service, which holds exclusive rights to La Liga. There will be a Spanish- and English-language stream as with all La Liga matches on the platform. There will be an El Clasico pregame show on both ESPN2 and ESPN+ an hour before kickoff at 9 a.m. ET.

MORE: How Real Madrid & Barcelona are faring in Champions League

The match will be staged at Barcelona’s Camp Nou, which was greenlighted by local authorities to be open to fans at full capacity. It’s the first time that a crowd will be at the Camp Nou to witness a Clasico since December 2019.

With the emotions at play in this game and both back lines experiencing their fair share of defensive nightmares this season, there’s no telling which direction this game could go. Barcelona is missing its best defender in Ronaldo Araujo and the left back position is up in the air with Jordi Alba in doubt. Meanwhile, Real Madrid manager Carlo Ancelotti has made defending a key point of emphasis for his club entering the match.

Barcelona will be under pressure from its home crowd to attack and chase the win, which could open up spaces for Real Madrid’s in-form forwards. Karim Benzema will be in the best position to take advantage, and he’s also Madrid’s designated penalty taker. To get him at +115 to score in what should be a wide open game is hard to pass up, especially in the form he’s shown (goals in five of Real Madrid’s past eight games) as he builds a case for the FIFA Ballon d’Or award.

It’s worth noting he has scored in a quarter of the Clasicos in his career: