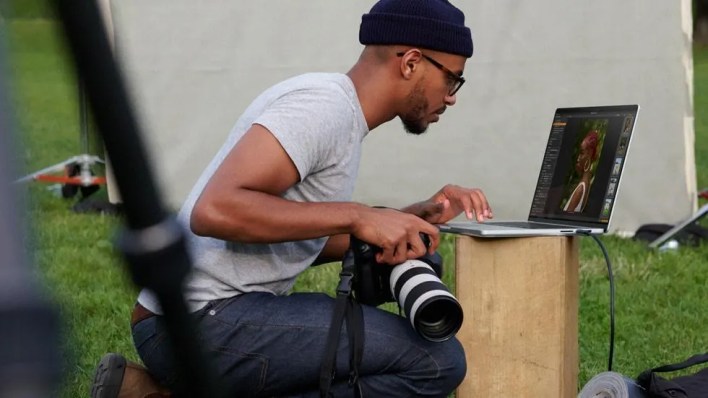 Taking a look back at another week of news and headlines from Cupertino, this week’s Apple Loop includes all the details on the new MacBook Pro from prices and processor to notches and gotchas, the colorful HomePod mini update, the third generation AirPods, the new Siri-only Apple Music plan, iPhone 13 production cut, a notchless iPhone 14 leaks, and the exquisite Polishing Cloth is sold out.

Apple Loop is here to remind you of a few of the very many discussions that have happened around Apple over the last seven days (and you can read my weekly digest of Android news here on Forbes).

The New MacBooks Are Here

The big apple news this week of course is the launch of the new MacBook Pro design with the 14-inch and 16-inch models taking centre stage on Monday. Sporting the uprated M1 processor – now officially branded as the M1 Pro and the M1 Max – the new design of laptop has the promise of more power in a new design… but some of those choices are interesting.

“The laptops have larger 14.2in or 16.2in screens with significantly smaller bezels and a notch similar to the iPhone for the upgraded 1080p webcam. Both displays have miniLED and 120Hz ProMotion technology as seen in the iPad Pro for increased brightness, HDR (high-dynamic range) support and smoother animations.”

It’s the use of Apple’s own silicon that Tim Cook and his team see as game-changing. For a start it makes direct comparisons with the competition that much more abstract. Apple’s small print shows it’s using the 2019 MacBook Pro as it’s comparative baseline:

“The MacBook Pros are powered by two new Apple Silicon chips, the M1 Pro and the M1 Max—each are huge steps up from the M1 in terms of both CPU and GPU performance. Apple says both chips are twice as fast as the previous-generation Core i9 MacBook Pro at CPU-bound tasks. The M1 Pro is up to 2.5 times faster at GPU tasks, while the M1 Max is up to four times faster.”

While the new miniLED screen stands out both for its colour and the drastic reduction of bezel size, there’s the small matter of where the FaceTime camera and sensors are. Mounted inside a great big notch cutout, like some demented offspring of the iPhone.

Because the screen resolution is slightly higher, you still have a 16:10 ratio screen of previous MacBooks, plus an extra strip of pixels for the menu bar and the notch location. But numerically the same is not the same as emotionally the same. The notch is there, screaming out at you, and the geekerati are not especially happy:

“As a means of visual identity across its product lineup, the notch is practically synonymous with Face ID on Apple’s devices. Seeing one here (and then not offering the tech) is incongruous right off the bat. It starts things off on the wrong foot; sure, most people don’t love the idea of a notch, but usually, there’s the acceptance that you’re getting the addition of Face ID. Here the cost of the notch returns far fewer rewards.”

Of course it wouldn’t be an Apple launch (or in fact any product launch) if there was a bit of smoke and mirrors going on. For the MacBook Pro it was fast charging. While the hardware has that option, unless you buy the top-of-the-line MacBook Pro 16, you are not going to get a fast charger in the box. If you want to buy that 140W charger, you are looking at $100 for the charger… and another $50 for the MagSafe3 Cable:

“Having a second charger is not obligatory, but many MacBook Pro users find them useful to have; a common use is to have one wired into a desk or workstation, with the main one kept for travelling or at home. Being able to replace just the cable is also a good idea.

“But $49 for Apple’s sooper-dooper MagSafe cable? One of the key selling points emphasised in the presentation? A beloved feature brought back after six years of desire? On top of paying $100 for the charger?

With the launch of the AirPods 3, Apple brings its spatial audio system to its entry level wireless buds (as well as the requisite “longer battery life”). While regular consumers will be hoping for some big changes given the $169 price tag (and the AirPods 2 remain on sale at $119). is there enough on offer to outclass the competition?

“[Apple has] fundamentally shifted how the AirPods are viewed. In many ways, these don’t feel like simply an audio product anymore. Instead, they feel like something that unlocks the full potential of the iPhone – and that’s going to win over Apple fans time and time again.

“By adding experiences that non-Apple products simply can’t do and putting even more focus on the smooth functionality of AirPods + iPhone, they’re making the AirPods feel like a must-have accessory, rather than a simple pair of headphones.”

HomePods Get A Little Brighter

The HomePod Mini range has also been updated with Apple adding three new colors to the mix. The ability to pair with your iPhone, or run standalone, remains.

“Apple first announced the HomePod mini last fall. As you’d expect, the speaker comes with deep integration with the company’s other products. In addition to Siri support, its built-in U1 ultra-wideband chip allows you to quickly and easily hand off audio from your iPhone to the speaker. It’s also possible to pair two HomePod minis for stereo sound.”

Would you like Apple Music but need it at half price? Do you promise to only use Siri to play and control the music? Then the new Voice Plan in Apple Music is just for you. Exclusivly controlled by Siri, you get access to the full catalogue for $5. Asking it to play “Freebird” in a scottish accent should be okay, but I wonder how it would cope with my voice asking for Estonian punk rock classics “Meiecundimees üks Korsakov läks eile Lätti”?

“While Apple says the new Voice plan can be used to access Apple Music across “all your Apple devices,” it’s clearly been designed with HomePod in mind — similar to Amazon’s free music streaming for Echo. If using a phone, tablet or computer, it wouldn’t necessarily make sense to speak to Siri to play music when you have a device with a screen. However, the service could possibly be interesting to those who primarily listen to Apple Music via their AirPods — and don’t mind speaking all their commands.”

With the worldwide silicon chip shortage, shipping delays, and economic upheaval, it’s no surprise that smartphone manufacturers have been affect. Apple is not immune to this, with expectations on the iPhone 13 family sales being trimmed:

“The electronic giant had expected to make 90 million iPhones in the last quarter of 2021, reported Bloomberg. However, Apple was now having to tell its partners that the total will be lower by as many as 10 million units, sources told the business magazine. Apple shares fell 1.2% in after-hours trading on the news. “

iPhone 14 Set To Remove The Notch

While those lusting after the MacBook Pro are trying to come to terms with a notch that doesn’t feature any FaceID sensors, those looking at the next-generation iPhone 14 can see a notchless future. This week saw a look at the latest leaks that offer a pill-shaped cutout instead of the blocky bulging bezel of the current iPhone:

“The headline change is a new pill-shaped punch hole to replace the notch. Recent leaks reveal that Apple will abandon the notch but, in order to retain its Face ID biometric security system, the company will not follow Android rivals into using a standard circular punch hole. In theory, this sounded like a strange move, but Geskin’s renders show the change actually looks great and the pill (while bigger) arguably blends into the overall smartphone design better than a standard circular punch hole.”

How do you keep your new MacBook Pro looking good? With a cloth to wipe and polish it down. Apple, in a fit of generosity, will sell you one for $19. Amazingly, the cloth is out of stock until November. Times are tough in the supply chain:

“For the tragically unaware, Apple describes its latest creation as a poet would a spring day: “Made with soft, nonabrasive material, the Polishing Cloth cleans any Apple display, including nano-texture glass, safely and effectively. Oh yeah, and you’d better believe in-store pickup is also unavailable as of the time of this writing.”

Apple Loop brings you seven days worth of highlights every weekend here on Forbes. Don’t forget to follow me so you don’t miss any coverage in the future. Last week’s Apple Loop can be read here, or this week’s edition of Loop’s sister column, Android Circuit, is also available on Forbes.