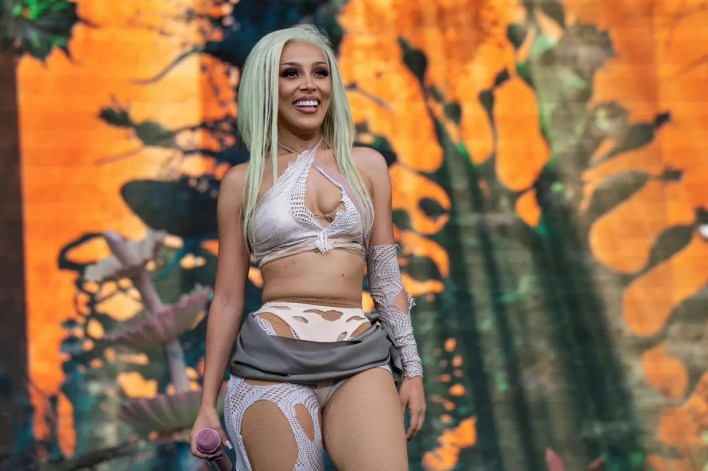 Almost exactly three years ago, Doja Cat played a sold-out headlining show at Austin’s now-defunct Barracuda, leading roughly 600 people in singalongs of her early SoundCloud uploads and new viral smash “Mooo!” At the time, I wrote that Doja Cat seemed poised to rocket to pop superstardom and put the cheap novelty of “Mooo!” behind her — as long as she could leave the controversy over her old homophobic tweets in the past and stop making headlines for negative reasons.

During her golden hour set on day two of Austin City Limits, Doja Cat proved she could conquer the world without diluting her persona one iota — and we were all fools for doubting her.

The 25-year-old singer and rapper born Amala Ratna Zandile Dlamini had the unique dilemma of being stuck on COVID lockdown while her star was blowing up in real time. Concerts got canceled as her chart-topping “Say So” ascended the Billboard Hot 100, spurred by a viral TikTok dance challenge and Nicki Minaj-assisted remix. Another TikTok trend similarly pushed “Streets” into the Top 20, while her new album Planet Her peaked at a career-best No. 2 and spawned the No. 3 SZA collaboration “Kiss Me More.”

Doja Cat continued courting controversy all the while. In May 2020, videos surfaced that appeared to show the singer participating in racist chat rooms, along with an old song called “Dindu Nuffin,” whose name comes from a racist slang term popularized on alt-right message boards and used to mock police brutality victims who “didn’t do nothing.” (Doja Cat apologized for the song and her chat room participation but said she had “never been involved in any racist conversations.”) She’s also been mum on her collaborations with producer Dr. Luke, whom Kesha accused of rape and sued in 2014, claiming sexual assault and battery, sexual harassment, gender violence and more.

One song notably absent from the set list was “Mooo!” It wasn’t missed. Doja Cat used her lo-fi novelty rap song as a Trojan horse to infiltrate the music industry in 2018, but it’s her airtight hooks, versatile vocals and dynamic stage presence that have kept her there. Flanked by lifesize flora set pieces, she rapped the nimble verses to “Rules” with ease, crooned into an auto-tuned microphone during “Shine” and busted out athletic choreography alongside her crew of dancers during nearly every song. Doja Cat’s aloof, irreverent, chronically online persona masks a tireless work ethic; she sings better, raps faster and dances harder than many of her peers, all at once.

She also flaunted a knack for reinvention as her backing band augmented songs with furious drum fills and soaring guitar solos. Obligatory set closer “Say So” got a nu-metal facelift, with Doja Cat delivering Amy Lee-approved vocal runs over the chorus before reprising it one last time in its original form. Both versions felt equally inspired, which is good, because Doja Cat’s audiences will likely never tire of hearing “Say So” — and those audiences are only going to get bigger from here.