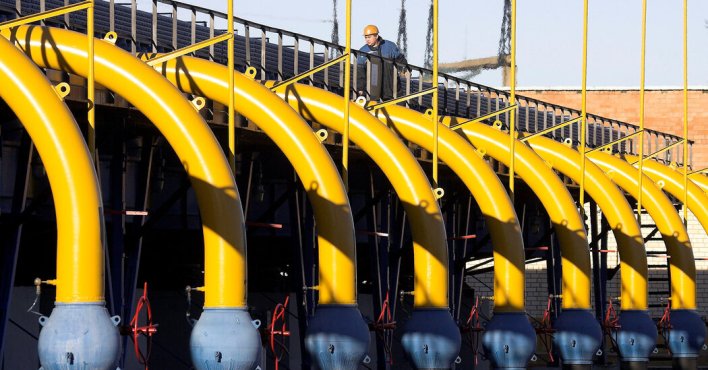 MOSCOW — Natural gas, already in short supply in Europe this fall, began moving away from Germany on Saturday and back toward the east in an unusual reversal in a major Russian pipeline, Russian media reported.

In themselves, the Russian reports were no cause for alarm, and the giant Russian energy firm, Gazprom, said Saturday that it is filling all European orders. One Russian news media report even suggested the flow reversal was a short-term problem caused by balmy weather in Germany over the weekend.

But the reversal is playing out against a backdrop of a politically charged explosion in gas prices in Europe and accusations that the Kremlin is restricting gas supplies for political purposes. One such purpose is to prod the E.U. into approving a new pipeline, Nordstream 2, that would bring gas from Russia directly to Germany, bypassing Eastern Europe.

More broadly, analysts say, the Kremlin may be sending a message about renewable energy, illustrating that too quick a pivot away from natural gas will leave the Continent vulnerable to fickle wind and solar supplies.

Analysts say Russia has for weeks now been slow to supply fuel to make up for shortfalls, often by limiting deliveries to its own storage facilities. The reversal of the direction of flow on the major Yamal-Europe pipeline was seen as a potential new wrinkle.

The pipeline connects Russia to Germany and crosses Belarus and Poland. It accounts for about 20 percent of Russia’s overland supply capacity to the European Union, suggesting a significant shortfall if its operations were halted.

A report by the state news agency, Tass, offered no explanation for the change of direction. It cited a German-based energy company, Gascade, saying flows had stopped and even slightly reversed in the Yamal-Europe pipe, sending gas eastward from Germany to Poland.

Gascade did not respond to a request for comment.

The Kremlin has a track record of using gas politically. In the 2000s, Russia twice cut supplies to a Western-leaning government in Ukraine, causing widespread shortages throughout Eastern Europe and leaving people shivering in unheated apartments in mid-January.

To avoid Russian energy embargoes, many Eastern European countries at odds with the Kremlin politically have purchased gas through contracts with other European countries, rather than from Russia directly. This practice became commonplace after the Ukrainian revolution in 2014, when relations between Russia and the West soured.

Ukraine, for example, switched entirely to such “reverse contracts,” so called because they suggest that the Russian gas is bought by Western European companies and then “reversed,” or sent back to the east.

A report on the Russian news agency Interfax blamed the gas reversal Saturday on these reverse contracts, saying customers in Poland continued drawing from the pipe even as demand in Germany shrank with the warm weather, causing the flow to change direction.

In any case, these deals work only when Russian natural gas is flowing through Eastern European pipelines in transit to the West. In recent years, however, Russia has sought to shift gas supplies to its undersea pipes linking directly to Western Europe, bypassing Eastern Europe and eliminating the possibility for reverse deals.

This is where the Nordstream 2 pipeline comes into play. Critics say the pipeline running under the Baltic Sea to Germany was not really needed but was built by Russia to strengthen the Kremlin’s energy leverage in Eastern Europe.

With the pipeline virtually finished, Russia is now seeking approval from German and E.U. regulators to begin operations. President Vladimir V. Putin has blamed Europe’s gas crunch on the failure of regulators to approve Nordstream 2 in a timely manner.

As the gas market crisis deepened in Europe through the fall, Mr. Putin argued that Russia could help — but only if European companies and governments agreed to lock in long-term contracts for supplies from Russia’s undersea pipelines. That, critics say, would ensure a market for Russian gas for years to come despite the move toward renewable energy sources.

Jones: Newcastle in a relegation battle

In China, Buying That Toy Gun Could Get You Arrested