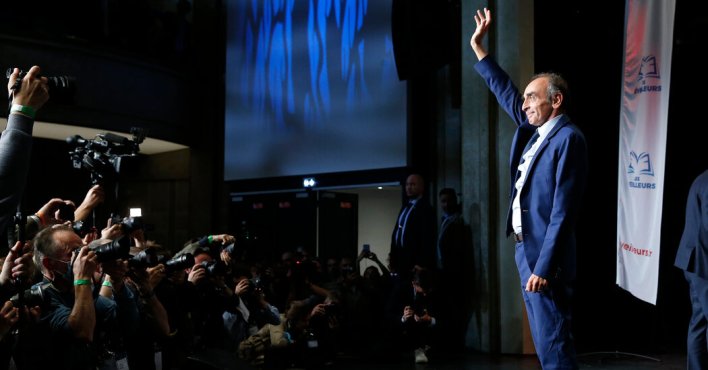 The reference was to Mr. Lévy’s passionate stand over decades for oppressed people from countries like Afghanistan, Bosnia and Nigeria, illustrated in his powerful recent book and movie, both called “The Will to See.” Mr. Zemmour quoted a phrase of Rousseau: “Beware of those cosmopolitans who search in their books for duties they disdain at home. Such philosophers love the Tartars in order to be spared having to love their neighbors.”

Mr. Zemmour’s own love of his neighbors is selective. Of France’s estimated six million Muslims, close to 10 percent of the population, he has said they should “be given the choice between Islam and France,” suggested their deportation might not be impossible, claimed they all consider jihadist terrorists to be “good Muslims” and said he would ban all “non-French names,” like Muhammad.

In 2019, in remarks that led to a conviction and a fine from a Paris court for “insult and provocation to hatred,” Mr. Zemmour said that “an Islamization of the street, like the uniforms of an occupying army, reminds the defeated of their submission.” In the 1930s, he added, the most lucid observers “compared Nazism to Islam.” He did not identify those observers.

Mr. Zemmour has never denied the Holocaust, which is illegal in France. But his remarks about Vichy are part of a habit of playing light with history.

After decades of equivocation, Jacques Chirac, then the president, acknowledged in 1995 the full extent of Vichy’s collaboration with the Nazis. It included use of the Vel d’Hiv, an indoor cycling stadium in Paris, to detain some 13,000 Jews, including 4,000 children, who were rounded up and deported to Nazi death camps. Some 80 percent of the children were French.

Mr. Zemmour, whose 2014 book “The French Suicide” was a best seller, has also reopened the Dreyfus Affair, saying last year that the innocence of Alfred Dreyfus, the French Jewish army officer falsely accused of treason, “was not evident.”

Sabina Nessa thought to have been killed on way to meet friend, say police

Sabina Nessa thought to have been killed on way to meet friend, say police