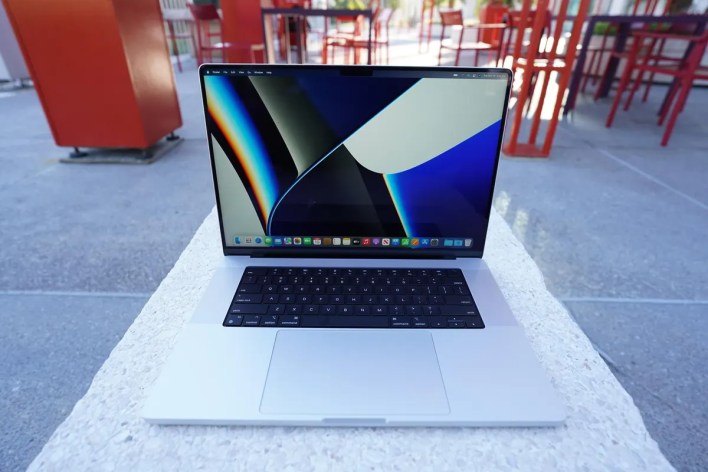 In the smartphone space, there is perhaps no word more overused than “Pro.” Almost every smartphone model, from iPhones to the latest Xiaomis, slap the “Pro” moniker at the end of phone names. The P-word has become so overused that tech brands have to add an additional qualifier (“Pro Max,” “Pro Plus”) to signify when a product is actually a top of the line model.

Apple’s newest 2021 16-inch MacBook Pro, however, bring prestige back to the “Pro” label, because these machines, running on Apple’s newest silicon, offer more processing power than most average consumers would ever need. The larger 16-inch model that I tested in particular, packs enough processing power to satisfy professional filmmakers, musicians and digital artists.

The headline feature of this year’s new MacBook Pros are the chips inside—the 16-inch top of the line model is powered by Apple’s new M1 Max silicon, while the smaller 14-inch model runs on the M1 Pro. In terms of architecture, they’re the same: 5nm, ARM-based SoCs (system-on-a-chip) that maxes out at 10 CPU cores. The Max’s superiority comes down to it having more GPU cores and bandwidth for memory.

I’ll come back to these chips and why they matter. Let’s go over the rest of design and hardware, with a focus on the 16-inch model I’m testing.

Yes, there is a notch, because Apple chose slim bezels around its 16.2-inch screen without sacrificing webcam quality. Slimming bezels is a move that’s long overdue, as Huawei, Dell and others have made laptops that look sleeker than the MacBook for years.

It’s always good to get more screen, but this year even more so because Apple upgraded the display panel to support 120Hz refresh rate and Mini LED technology. As the name suggests, Mini LED uses much smaller LED modules beneath the display panel, which gives the machine powering them more room to make subtle adjustments. In layman’s terms, Mini LED screens can show greater contrast and deeper blacks, than an LCD panel. And when placed next to a 2019 MacBook Pro, this new machine’s display is clearly superior at displaying blacks and reds.

Throw in the 1,000 nits of maximum sustained brightness (or 1,600 nits fort short bursts) and we have an absolutely gorgeous, stunning screen that beats any laptop I’ve ever seen.

The screen is paired with a six-speaker system that is also among the best I’ve ever heard in a portable machine. Bass is strong, sweet mids and crisp highs. Other than the notch (which doesn’t show in most videos anyway due to forced letterboxing), this machine is exceptional as a portable media consumption machine.

Apple also made the uncharacteristic move of bringing back ports it had previously killed off: this machine sees the return of HDMI output, SD card slot, and MagSafe port (along with three Thunderbolt USB-C and a headphone jack). For any creative professional, the return of the SD card slot is a godsend, as I can move camera files over directly without needing to use a dongle.

The keyboard and trackpad are also top notch, especially the latter, which I’d also say is the best I’ve tested in the laptop space. At the upper right corner of the keyboard is a fingerprint scanner for security.

Inside the machine is a sizable battery with a capacity that Apple does not disclose, but I have been getting 16 hours of use when doing “basic” office productivity tasks like writing emails, articles and surfing the web. This is great. Charging up is fast, too, thanks to the 140W charging brick that comes with my top-end model. The machine can go from 0 to 100 in about 70 minutes.

The one downside of having this much hardware is the machine is quite bulky. The 16-inch MacBook Pro weighs 4.7-pounds and measures almost 0.7-inches in thickness when closed. It’s a hefty machine even compared to the 2019 16-inch MacBook Pro. Still, I had no problem fitting it inside my normal-sized Muji backpack.

I already said this new 2021 16-inch MacBook Pro gives me the best screen, speaker, and trackpad experience in any laptop I’ve ever tested, and yet I’ve only begun to scratch the surface for why this machine is a game-changer. That’s because ultimately, it all comes back to that Apple silicon, which has shaken the computer industry upside down in the past year.

In the personal computing space, it’s been consensus for over a decade that small, ARM-based, all-in-one SoCs are ideal for smartphones and tablets, but “real computers” need proper computer processors. The logic is that mobile SoCs are highly efficient and don’t generate enough heat to require a fan, but are capped at how much power it can output. Computer processors (like the ones made by Intel, which dominate the computer industry) are larger, less efficient in terms of keeping cool and energy usage, but have more processing power.

Apple’s silicon (starting with the M1 last year before the M1 Pro and Max this year) have taken that conventional thinking and threw it out the window: they are mobile SoCs that can somehow output enough power to compete with Intel’s latest high-end processors, yet because they are essentially smartphone chips, they manage to be highly efficient and rarely get hot.

And in both real world tests and benchmarks, the M1 Max is stunning, particularly on my model with 64GB of memory and maximum 32 core GPU.

In a video rendering test, my machine was able to render a four minute long 8k video file (7.6GB in size) in a minute and a half. The same process took nearly nine minutes on my 2019, fully spec’ed out MacBook running on Intel’s Core i9. The same test on a new 2021 Windows machine takes 13-20 minutes depending on configuration.

And the whole time the new M1 Max MacBook rendered the file, it remained cool and quiet (there is a fan, but it did not need to be turned on).

Rendering 8k video files is an extreme usage case that 99% of people won’t ever need. So I rendered a smaller six minute 4k video, and the process took 50 seconds.

In benchmark numbers, the MacBook Pro output hits scores that far outpace all but the most high-end, spec’ed out machines on the market.

I’ll be honest: this machine packs more processing power than most average consumers will ever need. Even I don’t fully make use of this machine’s full potential, and I have a secondary job making semi-professional quality YouTube videos.

This is a machine with so much GPU power it’s for real creative professionals: filmmakers, musicians, digital artists.

The new MacBook Pro runs MacOS Monterey 12.01.1, and it’s a clean-looking software that behaves similarly to last year’s MacOS. New software additions include the ability to bring up a “Quick Notes” notepad when I drag the mouse cursor to the lower right corner. This is a very smartphone-like move. Otherwise, expect the same excellent seamless software experience here. The machine did not lag or freeze once during my 10 days of heavy use.

The new MacBook Pro is a machine for true creative professionals, and the price reflects that. The 16-inch model with M1 Max chip starts at $3,499. And my version that has maximum memory and 2TB storage goes up to $4,400. The truly maxed out model costs around $6,000.

If your laptop usage consists of “basic office tasks” like sending emails, video calls, typing words, and browsing the web, you will almost certainly not be getting your money’s worth with this specific M1 Max model. You’re better off buying the lower tier M1 Pro or even last year’s M1 MacBook Air instead—unless you really have money to spend and just don’t mind handing over three to four thousand dollars.

However, if you do creative work, if you make videos, make music, create graphics or 3D models, then this machine is powerful enough to handle anything you throw at it. And if you’re one of these people, I reckon $3,499 and up for a machine that can be your main work machine for the next several years is a fine price.

Whatever the case, Apple’s silicon is groundbreaking, and it has changed the computing industry for good.

Fubo Q3 Earnings: If We See A Beat, The Market Will Have To Relent